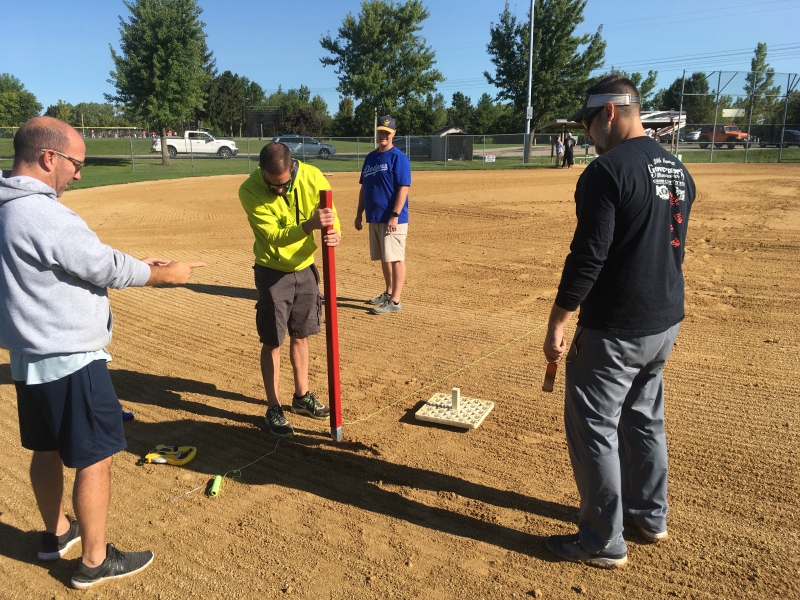 CUTLINE: Mark Crowley (left) directs Steve Potts (holding tool) while driving a base peg into the ground Sept. 13 during diamond expansion work at Smitty Field (Crow Creek Park No. 5). Looking on are Fleet Larsen (Dodgers jersey) and Paul Ragona (black sweatshirt). In the background, Jason Bratcher and Chris Davison are performing other duties on the all-volunteer crew.

Despite the COVID-19 pandemic — or perhaps because of the scourge — Bettendorf-Pleasant Valley Youth Baseball’s “Fall Ball” program drew a record-shattering number of participants in 2020.

Registrations increased by nearly 200 participants over the record-setting sign-ups from the fall of 2019. Included are a standard-setting 14 fall teams in the Triple-A division, a smash-up of the regular-season Juniors and Seniors Divisions for ages 13-17 (some older players do participate as on-field coaches and role models).

“The explosion has been great to see,” said Steve Tappa, secretary and spokesperson for BPV’s all-volunteer board. "It’s fantastic to have more and more kids participate in and enjoy this great game. That’s why we do what we do.

“While we have continued to build and grow our total program over the last decade, though, I think BPV actually benefitted from the crazy circumstances this year. The Hitman fall league annually attracts some teams from this side of the river, but that was canceled because Illinois is not allowing youth sports right now. There also have been changes to school sports at all levels, and other youth sports that play in the fall, so I think BPV helped fill the void for many families just hoping to get their kids outside and remain active. The fact we showed how we could operate during the shortened summer season also helped calm some minds.”

Because of the “explosion,” Rookie Division (Coach Pitch) games were moved from the Crow Creek Park 4-Plex down the hill to Crow Creek No. 6, and also to nearby Scheck Park.

As a result, six Rookie Division games — the full slate for a 12-team circuit — now co-exists with a jam-packed 4-plex on Saturdays, with eight games each in the Double-A and Single-A Divisions. Games are scheduled at 9 a.m., 11 a.m., 1 p.m. and 3 p.m., with only the afternoon shift of games needed at Scheck.

Smitty Field (aka Crow Creek No. 5) also was expanded to help accommodate the increased numbers in the Triple-A Division.

The diamond expansion project was complicated by rain that week, especially on Thursday, Friday and Saturday. That washed out a planned work session that Saturday, as well as a Plan B under the lights Saturday night, necessitating Sunday morning work which also included saving the diamond from the accumulated rains for games later that day.

The BPV thanks all of the coaches involved for their time, dedication and commitment to the all-volunteer organization’s commitment to making baseball the best it can be in our community.

FOR MORE PICTURES FROM THE EXPANSION WORK:
https://bpv.teampages.com/photo_albums/147978-Smitty-Field-expansion-2-2--photo-album/album_photos