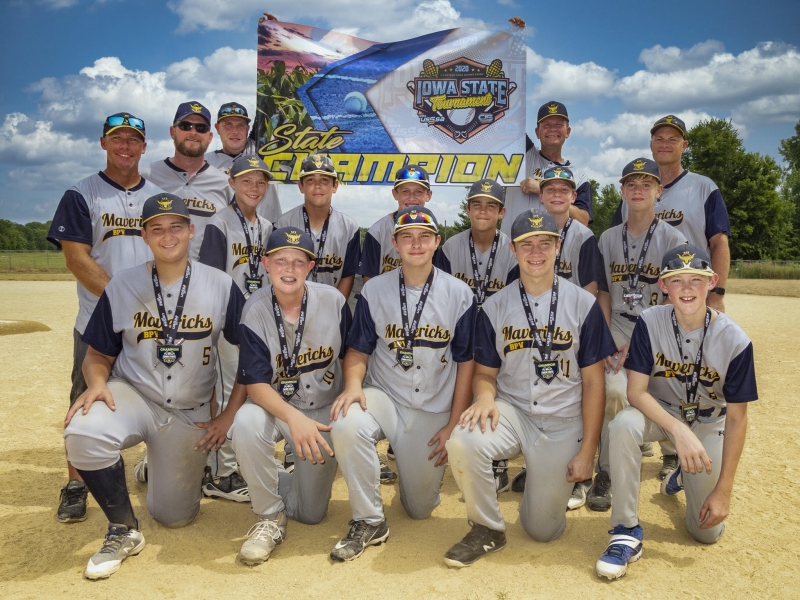 “Big one for the boys after only being a team for less than a year,” Mavericks coach Fleet Larsen said. “Hopefully this also helps show what we plan to do in the upcoming seasons with BPV weekend tournament teams.”

The championship marked a comeback from an 0-1-1 pool play start for the Mavericks.

In bracket play, the Mavericks went 3-1, avenging their lone loss to the Cedar Valley Blackhawks in the division final.

Highlights included a 6-inning complete-game pitching effort by Cam Raskin in an 8-5 bracket-opening victory over the Cedar Rapids Warriors Red.

Owen Zietlow also had a solo home run to spark an 8-1 win over the Cedar Rapids Warriors Red in the semifinals.

In the championship rematch against the Blackhawks, the pitching duo of Chase Cournoyer and Kaden Ledbetter teamed to wiggle out of tough spots and hold their foes to 5 runs on 8 hits. Every Maverick also reached base at least once, and clutch hits each inning led to a 9-5 victory.

Over the six-game tournament, the Mavericks scored 55 runs on 58 hits, 11 for extra bases including the homer. The pitching was solid, too, with 46 strikeouts vs. 23 walks in 30.4 innings to strand 30 runners on base.

In preparation for their 14-under season in 2021, the Mavericks are hosting tryouts Saturday, Aug 22 (10 a.m.-noon) at Saldivar Field at Devils Glen Park.

The Mavericks, who will have a few roster openings, will be playing BPV Senior Division games during the week and 2-3 USSSA tournaments per month. Players with birthdates between May 1, 2006 and April 30, 2007 are eligible to tryout and play for the Mavericks.

If you plan to attend the tryout, please send an email to fdlarsen@gmail.com with parent name, player name and mobile number so we can ensure the tryout is able to accommodate those interested.

BPV also has some upcoming extra weekend baseball opportunities for our 8-under, 9-under and 10-under participants next season. The non-profit, all-volunteer charitable organization also is seeking prospective coaches at the 11-under, 12-under and 13-under levels.

All families are eligible for the BPV’s weekend tournament teams, but these opportunities are separate from the soon-to-launch Bettendorf Baseball Club (BBC) partnership between BPV and the Bettendorf High School baseball program.

The BBC informational meeting and tryouts are being rescheduled after being postponed by this month’s damaging storms. Dates will be announced soon at BPVBaseball.com.

Dates and times are also yet to be determined for the upcoming tryouts for the BPV’s 10-under tournament team, the BPV Wolfpack.

However, those tryouts will be soon, so if interested, please e-mail Matt Wood at mcw1205@aol.com with “WOLFPACK” IN THE SUBJECT LINE to be added to the tryout announcement list and you will be the first to know the tryout schedule.

The BPV Wolfpack is a tournament team that was formed in 2019 and will again play several local tournaments next spring/summer alongside with the regular BPV season. To be eligible for the 10-U team, you have to be at least age 10 or under as of May 1, 2021 or in 4th grade.

The 10-U tournament rules consist of regular baseball rules with kid pitchers and lead-offs. But children younger than the traditional 10-U division are welcome to tryout if the skill set is apparent to compete at the higher level.

Additionally, BPV is looking to form teams at the 8-U (coach pitch) and 9-U levels. The same May 1 age cutoff applies.

If you have a player in those age ranges, please email mcw1205@aol.com with “8U or 9U” in the subject line. There are no coaches selected for these age groups yet and we will explore the options once we can gauge interest levels.

Interested coaches at the 8-U and 9-U levels can contact Wood at mcw1205@aol.com or 563-340-5917 to learn more about the guidelines and process to get a team going at these ages.

If interested, either as a coach or player in the 11-13 levels, please contact Steve Tappa at tappasteve@qconline.com.